«Education – the bridge between Azerbaijan and Ukraine»

Baku, November 13, 2012: the press conference devoted to prospects of cooperation of Azerbaijan and Ukraine in education took place. Participants told about possibilities and advantages of the higher education in Ukraine, students and were presented by higher educational institutions of Ukraine.

During press conference the subject of the higher education in Ukraine, competitiveness of experts was discussed with the Ukrainian diploma on a labor market, conditions of receipt and process of selection of foreign students, and also conditions of entrance and residence in Ukraine during study. Also founders of show told as the idea of the project was born and shared the impressions of collaboration process.

Participating in press conference the head of the office of Youth fund of Azerbaijan Faig Gurbatov, the third secretary of the Ukrainian embassy in Azerbaijan, and representatives of HIGHER EDUCATION INSTITUTIONS of Ukraine told about education possibility in Ukraine.

In press conference the third secretary of the Ukrainian embassy took part in Azerbaijan on information, humanitarian and cultural affairs Yury Lepey who told about importance of partnership between two countries in humanitarian field and in education. «Between Ukraine and Azerbaijan there are close partner connections as in humanitarian field and in the field of education, and in all other spheres. Now Ukraine closely cooperates with such universities of Azerbaijan, as BGU (The Baku state university), BSU (The Baku Slavic university), AGEU (The Azerbaijani state economic university). From this point of view it is possible to consider this year very successful».

The head of the office of Youth fund of Azerbaijan Faig Gurbatov also expressed support to the project: «Today our many compatriots gets education in Ukraine. It means that between two countries close cooperation in education is conducted. Further we will support to similar projects in education».

Victoria Sergiyenko told about prospects of the international cooperation and as a whole about the Ukrainian higher education the director of GP «Information and image center» of the Ministry of Education and Science, youth and sports of Ukraine noted: «The number foreign - including Azerbaijani – the students getting education in Ukraine in recent years grows. It means that between two countries there is a prompt development in education». Victoria Sergiyenko also noted that now the great attention is given to involvement of foreign students to Ukraine. «To study in Ukraine it is prestigious, diplomas admit around the world, thus accommodation is cheaper, than in Europe, there are no ethnic and religious conflicts, Ukrainians very hospitable and friendly people».

The dean who has made a speech at press conference of faculty on work with foreign students of National aviation university of Ukraine Alexander Sidorenko declared that the aviation university is the unique HIGHER EDUCATION INSTITUTION which during Post-Soviet time managed to keep old professorial structure and educational base. «At our university it is possible to get education in the Ukrainian, Russian and English languages. Now it is one of the strongest universities in the world. Thanks to close cooperation with other universities we also carry out an exchange of teachers that in turn allows our students to get better education».

The representative of the ATV channel Vado Karovin declared: «The teleproject of a similar format will be broadcast in Azerbaijan for the first time. The project «Mission the student» is the first quiz show which has brought together 40 school students on a competitive basis».

Five episodes of a TV show "Mission - the student. Who wants to study in Ukraine?" will leave on ATV TV channel every Saturday since since November 17, in each of which the plot about one of HIGHER EDUCATION INSTITUTIONS of Ukraine will be shown to the audience, and the destiny of the winner will be solved in the ending which will appear on air of December 22. 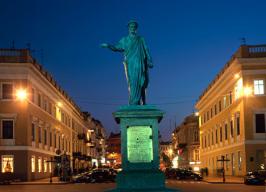