When Ukraine sees economic prosperity the profession of ethnographer will be among the most popular and well paid. You may of course argue with this statement. But jokes aside, the traditional culture is becoming a rarity in the modern globalized world. Ukraine is one of the few European countries where ethnic culture is not just a historical fact but a reality. Therefore much of appreciation deserve the enthusiasts who are not only aspire to preserve the vast ethnic heritage of this land but also update it, make it ‘digestible’ to the younger generations, and ultimately popularize it throughout the world.

This is especially what the authentic Ukrainian musical culture is concerned. National revival taking place in the early 90-s reawakened with Ukraine’s independence had brought to life a range of bands playing a mixture of traditional "roots" music, ballads and original material. This is truly remarkable taking into account that all ethno-rock bands perform in Ukrainian language only, which has never been prestigious during the Soviet times, and today Russian products still predominate in rock and pop musical culture. Despite this, the Ukrainian ethno-rock musicians managed to bring new spirit into somewhat obsolete or unjustly forgotten music and lyrics. Experimenting with sounds, permanently oscillating between folk and contemporary music resulted in an original and totally individual music trends that have been created in Ukraine. Ukrainian melodies, infused with elements of jazz, folk, rhythm & blues, and pure rock music are now getting immensely popular among most advanced public in Kyiv, major Ukrainian cities, and abroad. One of the cult idols of Ukrainian ethno-rock is rock band Vopli Vidopliasova, or simply VV. It was the first one to synthesize Ukrainian ethno-music with rock and performed in Ukrainian back in 1988. Fronted by eccentric Oleh Skrypka, the group has worked for the past several years in France. Its original style with bayan (a kind of accordion) sounds widely used has made VV immensely popular with both European and Russian public. Back in Ukraine now with new ideas VV is inexhaustible and enchanting. No wonder, as the musicians have recently confessed, they perceive Ukraine as the most mystic place on Earth! If you still consider accordion a dull musical instrument you will change your mind immediately if one day have a chance to listen to Ukrainian band Haidamaky. They perform in an original Karpaten SKA style, which is a synergy of Ukrainian authentic music with various roots-influences, from Jamaika SKA to Gypsy melodies. Haidamaky is one of the few Ukrainian bands well known in Europe, especially in Germany, and the first one in Ukraine to sign a contract with EMI. Genuine jewel of Ukrainian artistry is Kyiv based band Mandry, which is translated literally as “travels”. The group leader Foma identifies the band’s musical concept as postindustrial eclectic folk. Mesmerizing philosophical ballads in the reggae style are saturated with national mythology. Life is a fairy tale, indeed, - such is the worldview of Mandry. Their high standard modern stylish music has already grabbed the hearts of younger Ukrainians, as well as Eastern European public, and was a great success in the UK during the recent concerts. 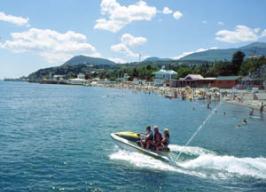