Achievements of students of the Ukrainian HIGHER EDUCATION INSTITUTIONS

Ukraine presented to the world many persons which have become known in various branches of science, cultures, art and sports. And it not only the people living presently, and and about what we know according to historical documents. Let's remember names of the outstanding persons which have got education in educational institutions of Ukraine.

At the beginning of the XX century the world opera scene was subdued by the talented graduate of the Lvov conservatory of Galitsky musical society – Salomey Krushelnitskaya's Ukrainian singer. There will pass years and her follower as the graduate of the Lvov conservatory – Ruslan Lyzhichko, will win a victory at the competition "Eurovision" in 2004.

The Ukrainian director Alexander Dovzhenko, the graduate of Glukhovsky teacher's institute (nowadays, Glukhovsky pedagogical university) is not less known for the whole world. Its film "Earth" is considered the conventional top of the Soviet mute cinema.

Many Ukrainians became famous in the sports sphere. Such Ukrainian athletes as became the real legends: Sergey Bubka (graduate of the Kiev institute of physical culture), Oleg Blochin, Andrey Shevchenko. The graduate of National academy of a state administration at the President of Ukraine Vitaly Klitschko became not only the world famous boxer, and and the successful politician. It is necessary to tell and about such outstanding athletes as: Yana Klochkova, Anna Bessonov, Irina Deryugina which as are pupils of the Ukrainian educational institutions.

Political and historical figures of Ukraine are not less known. Among them the known historian Mikhail Grushevsky, which "Alma-mater" became the Kiev state university. And also V. Vernadsky - one of founders and the first president of the Ukrainian academy of Sciences, the founder of many schools of sciences; one of representatives of a kosmizm; founder of a science of biogeochemistry.

The big contribution to a science was made by the most talented Ukrainian scientists, such как:выдающийся doctor-cardiologist Nikolay Amosov, surgeon Nikolay Pirogov, the known builder of tselnosvarny Evgenia Bridge Patan, Alexander Bogomolyets's biologist and many other.

Every year the Ukrainian educational institutions let out from the walls of one thousand qualified experts of the business. And it is possible therefore to be sure that yet one asterisk will be lit in the Ukrainian sky which will make the contribution to mankind development. 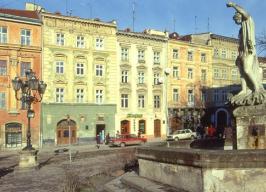