Achievements of Ukraine in 20 years of independence

Not so long ago Ukraine was 20 years old. For these 20 years the country of much reached and since 1991 we have a set of merits.

For example, the independence extracted without bloody wars. 20 quiet years without any conflicts. Ukraine – one of few space powers of the world. In comparison with many other countries of the former USSR in Ukraine there is the real democracy and freedom, and also prospect of membership in the European Union.

As Roman Shporlyuk, the professor-historian of the Harward university notes: «Ukraine maintained the peace with all the neighbors. Avoided the civil or armed internal conflicts, whether it be on the ethnic or religious soil. This unprecedented achievement for all Ukrainian history».

Ukraine – one of a few world space powers. At us make the most non-polluting launch vehicles in the world – 3SL Zenith. Ukraine together with the USA, Russia and Norway is the co-owner of the project «Sea start».

Ukrainians developed the plane with the biggest loading capacity – "Mr_yu". The "chain armor", one of the most effective stations of radio engineering investigation in cost about 24 million dollars, also was made in Ukraine.

We can be proud and our athletes: the quadruple Olympic champion in swimming by Yana Klochkova, absolute world champions in heavy weight boxers Klitschko's brothers. Our national team also is acting winner of the chess Olympic Games. In 2002 Ukrainian Ruslan Ponomarev in the 19 years became the youngest in the history the world champion in chess.

Our football player Andrey Shevchenko became the best football player of Europe in 2004, and the Donetsk football club "Shakhter" in 2009 won the UEFA Cup. It is necessary to mention also that not so long ago Ukraine together with Poland adequately coped with carrying out the football Euro-2012 championship.

Ukraine not a word, and actions has an effect long ago on the whole world. We surely look in the future, giving all possibilities for prosperity to younger generations. 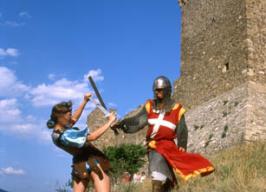