The smallish town of Baturyn in Chernihiv region has played an ancient and notable role in the history of Ukraine. From 1669 to 1708, Baturyn was the residence of three hetmans of Left-Bank Ukraine. In 1708, under Hetman Mazepa, over 20,000 residents lived in the town. Unfortunately, little is known of what the then-capital of the Hetman state looked like.

There are mentions of the numerous temples, palaces, crafts and even gunpowder storehouse, one of the largest in Eastern Europe. Radas (councils) assembled three times a year, in which senior Cossack starshyna (officers) and elective representatives took part. There were secular assemblies and people’s festivities with fireworks on special holidays. Why was the town’s historical past forgotten for exactly 300 years? Where did the archives disappear, as well as the buildings and, most terribly, the people and their memories of the town? On October 30, 1708, Moscow’s Tsar Peter I gave an order to destroy Baturyn. That was revenge for Hetman Ivan Mazepa’s siding with Swedish King Charlse XII during the Great Northern War between Sweden and Russia. On November 2, the Russian Army under the command of Aleksandr Menshykov captured the town and razed it to the ground. Not only did they kill the defenders, but almost all the civilians, regardless of their gender or age. The casualties were estimated between 12,000 and 21,000. Only the Cossack starshyna were left alive to be executed publicly. According to the Tsar’s order, it was forbidden to settle in this area for a long time. Eighteen years later, the register of the land to be handed over to the same Prince Menshykov mentioned that Baturyn was completely devastated and the residents who had survived were living on the outskirts of the former town. In 1760, the last hetman, Kyrylo Rozumovsky, tried to revive Baturyn. Yet this intention was not to come true. After Rozumovsky died, Baturyn fell into utter decay. Only the central part of Kyrylo Rozumovsky’s palace (1802) has remained until today, as well as the Resurrection Church, being K. Rozumovsky’s shrine (1803), and the house of Chief Judge V. Kochubey (early 18-th сentury), the only building that has survived the devastation. Today, these monuments are part of the “Hetman Capital” preserve established in 1993. In 2007, President of Ukraine Viktor Yushchenko issued a separate decree on the development of the “Hetman Capital” National historical and cultural preserve. Thanks to this fact, Baturyn will live its second life. Archaeological investigations have been stepped up, the historical buildings are being restored and there are plans to create a memorial complex. On September 23, 2008, the urban-type settlement of Baturyn was granted the status of a city of district subordinance. 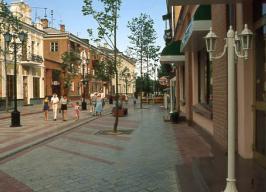