BECOMING A MEDICAL DOCTOR OR PHARMACIST IN UKRAINE!

To give hope, to save people’s lives, to cure refractory diseases and fight epidemics… At all times and in all nations, the medical profession has been and remains held in high respect, being at the same time an extremely responsible profession. Medical specialists who study abroad have always been highly valued in their native countries, because such a doctor knows not only the medical achievements of his own country, but also brings in the knowledge, skills, and advanced solutions of researchers from other countries.

When a prospective doctor chooses a country to study medicine in, he or she invariably considers the following three major criteria: today’s medical achievements of that country, the depth of its medical history, and the cost of education in that country. In this respect, Ukrainian medical education is among the world’s best because here the student has access to the latest achievements in modern medicine, is free to join work in the most advanced areas of medical research, and studies in a country that has a centuries-old tradition of raising medical doctors and strong research schools. In addition, the cost of education in Ukraine is significantly below the level of other countries.

Regarding the contemporary state of Ukraine’s medical research, the latter can be described as very powerful and having extensive development potential. At major global medical forums, Ukrainian specialists are known to report their latest achievements on a regular basis. And their ideas receive a welcoming response and recognition from researchers from other countries. Here are some examples.

Last year, Ukrainian children’s heart surgeon Illia Yemets made a revolutionary breakthrough. He proposed that when operating on newborn babies with heart problems, to use their own umbilical blood in the blood transfusion. Of the first ten babies operated on with the transfusion of their own blood, all ten have survived. Ukrainian heart surgeons were the world’s first regarding this invention.

Earlier, when ultrasonic diagnostics showed heart problems in the embryo, the expectant mothers were advised to abort the baby, as such a child would live a month at most after its birth. The only alternative was a heart operation. However, a 2-3-day-old baby’s system often refuses to accept a donor’s blood, which results in this baby’s death. According to the method proposed by doctor Yemets, the umbilical blood is collected at the moment of this baby’s birth, in which case this baby becomes his or her own donor. As a result, the operation goes much smoother and the patient recovers much faster. Illia Yemets is proud of his team for such a great invention. Now they use this new method with confidence, and have developed a medical procedure to handle such cases for doctors the world over. Illia Yemets is surprised by the fact that no one in the world has yet come up with this method. In the meantime, the global medical community borrows the experience of Ukrainian doctors while the staff of the Kyiv Center of Heart Surgery continues to study umbilical blood to determine its usefulness for adult patients as well.

Another promising invention of Ukrainian medical specialists is the stem cell treatment. For many people, this method is the only rescue from amputation. Now researchers study the possibility of growing new human tissues and organs in the future. Currently, this research effort involves more than 300 patients, and the preliminary results have already shocked the world’s medical community: an old man scheduled for the amputation of both legs began walking and even working like an able-bodied person after an experiment under which he received a few shots under local narcosis. There are already positive results in experimental stem cell treatment of infertile couples, patients suffering diabetes, cirrhosis, and even multiple sclerosis.

Ukraine is the leader in many areas of stem cell transplantation. Often, speeches of Ukrainian specialists gather larger audiences than those gathered by their counterparts from the USA and Western Europe. Women in labor from all over Ukraine nobly donate umbilical blood as a source of stem cells, the Criobank of Ukraine reports.

Ukrainian doctors also learn from the best experience of their foreign counterparts. Currently, the OKHMADYT clinic, Ukraine’s largest children’s hospital, began applying a new technology of maternity care for prematurely born babies, known as kangaroo maternity care. They have no equipment and incubators, and just a bare minimum of medicines. This new method has been patented by French specialists who are now helping Ukrainian doctors change the philosophy of maternity care for underweight babies. This method produces a sensational effect helping twice as many babies to survive compared to standard maternity care methods. Currently, the French specialists who hold the patent for this method are in active cooperation with their Ukrainian fellows in the profession from OKHMADYT and other leading clinics in Ukraine.

The cases described above are just some examples of the research achievements and inventions made in Ukraine lately. Students of Ukrainian medial academies are introduced on a regular basis to all these achievements and new treatment methods, and Ukraine’s leading medical specialists work not only as doctors, but also share their knowledge and experience with younger generations, giving lectures, working with interns and so on. Such a practice is not at all new to Ukraine. In fact, for centuries, Ukrainian medical schools and Ukrainian medical education have been among the most influential in Europe and the world.

The 20th century proved especially fruitful for the development of medical education and science in Ukraine. In that period, Ukrainian research schools gained international recognition. In particular, developing the most intensively were areas such as microbiology (I. Mechnikov, D. Zabolotny), biology (O. Bohomolets), and medicine (O. Bohomolets, M. Amosov), just to name a few.

In the mid-20th century, Oleksandr Bohomolets, a world-famous doctor and pathological physiology researcher, created his own research school in Kyiv, the capital of Ukraine. He studied and described many diseases in the field of endocrinology, metabolism and immunity disfunctions, allergy, cancer, blood circulation pathology (in particular, high blood pressure), shock pathogenesis, blood transfusion effects, the system aging mechanism, and so on. A lot of his works set the grounds for entire areas in modern medical research. Today, the name of Oleksandr Bohomolets is given to the Kyiv National Medical University, and his granddaughter, Olha Bohomolets-Sheremetieva, a fourth-generation doctor, holds the titles of Doctor of Medicine and Professor and heads one of Kyiv’s well-known clinics.

Ukrainian heart surgeons are known all over the world. In 1963, Mykola Amosov, a doctor from Kyiv, was the first in the USSR to perform a mitral valve prosthesis, and in 1965, he was the first in the world to create and introduce into practice anti-thrombus heart valve prostheses. Mykola Amosov was among the initiators of the large-scale introduction of surgical treatment of lung diseases in the USSR. His works substantially lowered the level of tuberculosis cases and improved the treatment effectiveness of lung diseases. In 1955, he was the first in Ukraine to surgically treat heart diseases and one of the first in the USSR to introduce the artificial blood circulation method in 1958 on a large scale. The Institute of Cardiovascular Surgery founded by Amosov and now bearing his name is quite justifiably regarded as one of the world’s best centers of heart surgery. Mykola Amosov passed away in 2002, but his cause continues to live.

Modern Ukrainian medicine is progressing rapidly. Ukrainian clinics have chairs of higher medical educational institutions, and Ukrainian doctors often combine professional practice with teaching. This is the reason why Ukrainian medical students receive the latest information from the first hands. Students at Ukrainian medical universities acquire not only theoretical knowledge but also hands-on skills in real-life situations. The shift toward hands-on experience is a specific feature and an indisputable competitive advantage of Ukrainian medical education. This is probably the reason why, for example, most foreign students in European and North American countries study economics, whereas in Ukraine, they prefer medicine. Currently there are 15 universities and academies preparing doctors and pharmacists in Ukraine. They invite you to come and study. 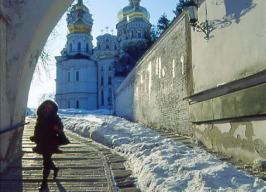