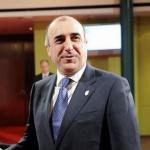 Elmar Magerram Mamedjyarov — the Minister of Foreign Affairs of Azerbaijan since 2004.

From 1977 to 1982 Elmar was trained at Faculty of the International Relations and International Law of the Kiev State University.

During the period from 1982 to 1988 the Soviet Socialist Republic held a position of the second and first secretary in the Ministry of Foreign Affairs Azerbaijani.

From 1988 to 1991 studied in Diplomatic academy of the Ministry of Foreign Affairs of the USSR in which in 1991 protected candidate on stories and received degree of the doctor of historical sciences.

In 1989 — 1990 was trained on an exchange in the Center of planning of foreign policy at Braunovsky university in the USA.

Having returned home in 1991, within a year held a position of the head of department of the state protocol of the Ministry of Foreign Affairs of Azerbaijan.

During the period from 1992 to 1995 was the first secretary in permanent mission of Azerbaijan in the United Nations (United Nations).

In 1995 — 1998 Elmar Mamedjyarov managed Management of the international organizations at the Ministry of Foreign Affairs of Azerbaijan.

On the occasion of the 15th anniversary of independence of Ukraine, the president of Ukraine signed the Decree it Elmar Mamedjyarova's rewarding for a powerful contribution to development of the international cooperation, strengthening of authority and positive image of Ukraine in the world, promoting of its historical and modern achievements.