The other facts in favor of Ukrainian institutions of higher learning as the destination for an education include the venerable age of the country’s leading universities and the credibility and achievements of Ukrainian research schools in various fields of knowledge.

The turn of the 19-th to 20-th centuries saw the intensive development of Ukrainian research schools. The founder of the Ukrainian Academy of Sciences, Volodymyr Vernadsky, is the father of geochemistry and biogeochemistry. The Nobel Prize winner, Illya Mechnikov, was a bacteriologist and immunologist, the father of gerontology and creator of the theory of immunity, a scholar of encyclopedic knowledge studied at Kharkiv University and worked at the Novorossiysk University in Odesa for a long time, and later at the bacteriological station, which he founded. In this period, Mechnikov studied the human immune system and discovered the phenomenon of phagocytosis. In 1888, Mechnikov accepted the invitation of Louis Pasteur to work at a newly created institute in Paris. His research works received recognition there and he was awarded the Nobel Prize for studying the immune system. The biostation created by Mechnikov in Odesa is still in operation. Now it is called the Odesa Research Institute of Virology and Epidemiology.

Humanity appreciates the invaluable research contribution of Danylo Zabolotny, a follower of Mechnikov, toward the effort of putting the cholera and plague epidemics under control. The Institute of Microbiology and Epidemiology, which he established in Kyiv, is still in operation. Oleksandr Bohomolets, a renowned physiologist, founded two institutes in Kyiv and created a strong medical school in the city. The founder of the theory of strength of materials, Stepan Tymoshenko, used to give lectures at the Kyiv Polytechnic Institute. Mykola Boholyubov founded a strong research school of physics in Kyiv. In the 30s of the 20-th century, Lev Landau, a Nobel Prize laureate, worked in Kharkiv where he founded a strong research school of theoretical physics. Landau headed the theoretical division of the Ukrainian Institute of Physics and Technology and also held the chairs of theoretical physics at Kharkiv University and the Institute of Engineering and Mechanics (the present Kharkiv Polytechnic University). Here, the great physicist was awarded the titles of Doctor of Physics and Mathematics and Professor. The legendary research school of Landau, who at that time was under 30, drew many talented young researchers to Kharkiv, including Eugene Lifshitz and Oleksander Akhiezer, just to name a few. As a result, Kharkiv turned into one of the leading centers of theoretical physics in the former USSR and it still retains this reputation.

Semen Braude worked in Ukraine in such areas of study as decameter radio-astronomy and radio-oceanography. The outstanding Ukrainian researcher Yevhen Paton developed methods of building unique bridges and invented new welding techniques. The Ukrainian researchers in the field of cybernetics also kept pace with global science. In the middle of the 20-th century, the research school of Viktor Hlushkov and Serhiy Lebedev gained wide recognition.

There is an array of inventions by Ukrainian researchers that have served as the foundation and point of departure for many areas of world science. These include such outstanding achievements as the controlled nuclear reaction to split atoms of lithium, the production of heavy water, the creation of the first computer on continental Europe, the establishment of a new branch in metallurgy known as electrometallurgy, the development of space rockets, aviation machines and equipment that has no equal in the world, among many others. 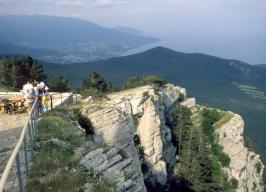