Every year to higher educational institutions of Ukraine come to study more and more foreign students. According to data of the Ministry of Education and Science, youth and sports of Ukraine, the annual gain of foreign students makes 10 %, and as a whole in the Ukrainian HIGHER EDUCATION INSTITUTIONS about 48 thousand students from other countries study.

What involves foreign students in receiving the higher education in Ukraine? First, it is rather inexpensive, in comparison with receiving the higher education in other countries. Secondly, in Ukraine qualitative academic school and level of the received knowledge. Thirdly, it is confidence that if you arrived to study, you will precisely study up, after all in Western Europe procedure much more difficult and there the diploma is received far not by each pupil. Fourthly, it is fine possibility to move to live to more developed state of the West. First of all interests students from poorer states.

To Ukraine come to study from the most different countries of the world. In total geography of the countries from which students go, totals about 129 states. The most numerous student's zemlyachestvo in Ukraine is the Chinese, Iranian, Russian, Syrian and Jordanian. The professions most demanded at foreigners - the engineer, the doctor, the economist and the financier.

With bigger hunting foreigners go to study to Kiev and Kharkov, and in Kiev foreign students twice more than in Kharkov. And the most popular Higher education institutions are the National aviation university (NAU) and National medical university of. A.A.Bogomoltsa.

Besides Kiev and Kharkov, foreign students go to study to Odessa, Donetsk, Lviv and Lugansk.

As a rule, all HIGHER EDUCATION INSTITUTIONS of Ukraine provide to foreign students housing in a hostel. Comfort of hostels directly depends on university/institute which accepts on training, and there are no strict norms. At desire and possibility, students can rent the apartment, but accommodation in a hostel has one conclusive plus – communication with the Ukrainian students and improvement of language skills. In a hostel it is much simpler to improve the relations and to make friends with other students, to communicate, concerning studied subjects. Besides, in collective there is a language and cultural adaptation much quicker. 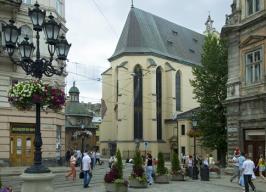