Location of Ukraine in Europe

The official coat of arms of Ukraine

The coat of arms of Kyiv

Trident (tryzub). The official coat of arms of Ukraine is a golden trident against an azure background... And even more information about Ukraine.

Trident (tryzub). The official coat of arms of Ukraine is a golden trident against an azure background.

The Ukrainian flag is composed of two equal horizontal bands of azure and golden yellow colors. It represents ripe wheat growing under the blue sky.

Total area: 603,700 sq.km.
Ukraine is the biggest only European country in Europe (Russia is much larger, yet has also Asian territories). It is divided into 24 regions (oblasts) and the Autonomous Republic of Crimea. The country has access to the Black and Azov Seas, and includes two mountain chains: the Carpathians in the West, and the Crimean Mountains in the South.

Kyiv, the capital of Ukraine
Kyiv (also known as Kiev), was founded by the three brothers Kyi, Schek and Khoryv, and their sister Lybid more than 1,500 years ago, 482 A.D. With an official population of about 2.6 million, Kyiv is a large European city. It is located on the banks of the Dnipro river that flows into the Black Sea. The Kyiv Coat of Arms depicts the statue of Archangel Michael who is considered to be the protector of the city. 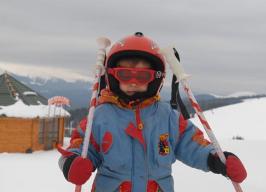