Like many other sports, hockey in Ukraine is developed on a high level. Maintaining its traditions since the Soviet Union times, whose teams were and are still considered among strongest ones in the world, Ukrainian hockey continues to develop and discover new talents.

For the first time Ukraine hockey was spoken about at the beginning of the 20th century. The honor of the first hockey game belongs to Lviv skaters society. In October 1904 they organized the first hockey tournament ever in Lviv.

Since then, the sport is developing rapidly, gaining more and more fans, meanwhile more and more children and young people dream of becoming hockey players.

For now there is a large number of hockey teams of various levels represented in the Ukrainian league. The most successful of them also participate in the Continental Hockey League (CHL) and other international competitions.

The strongest ones among Ukrainian hockey teams are: "Berkut" and "Falcon" from Kiev, "Donbass", Donetsk, Lviv "Lions" and "Kharkov Sharks".

Many Ukrainian sportsmen have proven their skills and won the right to become members of star teams of the National Hockey League. Among them: Ruslan Fedotenko, Alexei Ponikarovsky, Alexei Zhitnik, Danius Zubrus, Dmitri Khristich, Anton Babchuk and Nikolai Zherdev.

All these players and many others with honor and dignity represent their country within the international hockey arena.

Children hockey in Ukraine is developing not less rapidly. New ice stadiums are regularly open, meanwhile lots of competitions and tournaments are held on existing ones.

Opening of brand new ice rinks in entertainment and shopping centers supports the ice sport development. Anyone, regardless of age, can stand on skates and check out what it means to be a real hockey player or a skater. 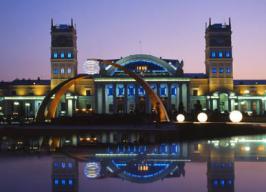