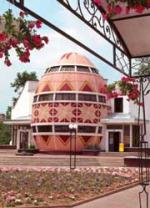 In the west of the country, in Ivano-Frankivsk region, there is a very lovely and interesting town – Kolomyya. There you are sure to notice a strange-looking structure shaped like an egg and made of colored glass. It is a unique museum for storing and exhibiting the works of pysanka  painting. Although it wasn’t built that long ago – in 2000 – it has already become a calling card for the region called Pokuttya, as well as all of Ukraine. A pysanka is a hen, goose or even ostrich egg which is painted using a special technology and colored with natural or aniline dyes.

The ornaments of this work of miniature painting have survived from pagan times. The museum possesses a collection of more than 6,000 pysankas from all over Ukraine, as well as Belarus, Poland, the Czech Republic, Sweden, France and even the USA and Canada. The museum’s employees have invented a special method for preserving and restoring pysankas. The Pysanka Museum is a part of the Kolomyya Museum of Folk Art of the Hutsul and Pokuttya regions. Its collection is considered a pearl of the cultural heritage of the pre-Carpathian region and Ukraine in general. The collection comprises 30,000 valuable and rare works of folk art of the Hutsul region. The museum features exhibits covering a long historical period: from the Trypillian civilization (4,000–3,000 B.C.) to the 20-th century. The basis of the exposition is the Hutsul folk art of the 17-th–20-th centuries: the national clothes, footwear, musical instruments, utensils, local architectural elements and works of folk art. However, it is not only the museum collections that make Kolomyya interesting. A short traditional song which is still common throughout Ukraine is called “Kolomyika”. One can also see the coloring in the folk masters’ works, which are not churned out especially for the tourist industry, but made for people and contain a part of the artist’s soul. You will definitely not see total commercialization and will feel at home while visiting one of the local restaurants, whose low prices are usually a pleasant surprise. 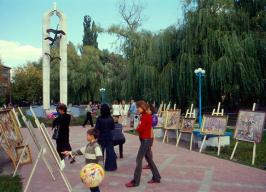