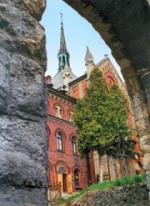 The Lion City became a home for many religions. For centuries, Orthodox believers lived in harmony with Catholics, and Greek-Catholics got along with Jews.
There is hardly any architectural style you can’t study by close examination of Lviv’s temples. In the Middle Ages, there were centers of organ music and organ construction, which Lviv was famous for together with such cities as Krakow, Warsaw and Vilnius. Study the heritage of the Lion City from ancient times to the modern period.

St. George Cathedral (1744–1779)
5, St. Yura Sq.
A masterpiece of the Ukrainian baroque, it was built in place of 14-th century temple by efforts of metropolitan A. Sheptytsky. It is considered to be a symbol of unity of the two branches of Christianity — Orthodoxy and Catholicism, since Western Ukraine is the motherland of the Greek-Catholic church founded in the 16-th century. The most precious relic of the cathedral is a miracle icon of the Mother of God (17-th century). The front of the cathedral is decorated with the figures of saints made by Johan Pinzel, a Lviv sculptor. He is well-known in Europe as the inventor of an original sculpture technique, and called Lviv’s Michelangelo.

The Latin Metropolitan Cathedral (1360—1480)
1, Kafedralna Sq.
The forms of the cathedral are strict and majestic. They make a harmonious combination of the elements of Gothic and Baroque styles. Polish king Kazimir the Great laid the corner stone of the Roman-Catholic church. At the end of the 19-th century, a stained-glass window that completed the interior of the temple was made according to the design of Ya. Mateiko, Yu. Mehoffer and T. Aksentovych. It now hosts the Lviv Cathedra of the Latin rite.

St. Nicolas Church (1264—1340)
28, Bohdan Khmelnytsky St.
The church was built as a burial-vault of Galicia princes and is one of the oldest architectural monuments of the city.

The buildings of the Bernardians monastery complex
1-3, Soborna Sq.
The complex unites the Bernardian St. Andrew’s Roman-Catholic church (1600—1630), monastery buildings, belfries, rotunda over the well surrounded by a defense wall and decorative column. Here everything reminds of charitable medieval monks who always took care of travellers: giving them refuge, food and warmth.

Dominican monastery complex
1, Stavropihiyska St.
The Dominican Roman-Catholic church designed by the architect Yande de Vitte is a majestic Baroque construction, whose interior is decorated with 18 unique wooden craved figures of saints of the Dominican Order. The ensemble consists of a monastery (16-th— 17-th centuries) and a belfry. Now, a museum of history of religions is located there. The cultural Center “Dzyga” includes a gallery of modern art, an acoustic concert hall, a saloon-shop and a recording studio. If you are lucky, you can become one of the participants of a creative action of the center, featuring Ukrainian and artists.

Uspenska Church Complex
7, Ruska St. — 9, Pidvalna St.
The Assumption Church of the Blessed Virgin (1591—1629), Korniakta Tower belonging to the most beautiful buildings in Europe and the Chapel of Three Baptists with examples of artistic perfection in Lviv Renaissance architecture skillfully combined with local traditions of building.

Armenian Cathedral (1360—1370)
7—13, Virmenska St.
The Armenians who settled down in Lviv in the 13-th century founded there a cathedral uniting the traditions of the national Armenian and local architecture. Opposite the cathedral is a column with the figure of St. Christopher, with the palace of the Armenian archbishop next to it. 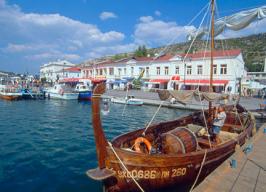