Language has historically been one of the key indicators of a nation’s sovereignty. For over four centuries the Ukrainian language has been subject to outright bans and propaganda campaigns designed to relegate it to the level of mere dialect. That has all changed since independence, with government policy focusing on support for Ukrainian as the sole state language.

This has proved a point of fierce contention, given the predominance of Russian in large sections of modern Ukrainian society, but one of the few areas where this transition has been relatively unopposed has been in the music industry, where a generation of Ukrainian stars have helped dispel the image of Ukrainian as a rustic and unattractive peasant tongue while helping to popularize the language among whole regions where there was previously little if any exposure to Ukrainian. The rich melodies of the language have been utilized in every genre from rock ballad to rap, leaving the old stereotypes in tatters and encouraging the emerging generation to feel a strong sense of attachment to a language which was once seen as politically suspect in the Russian-dominated Soviet era. The victory of pop princess Ruslana at the 2004 Eurovision Song contest with her Ukrainian Cossack flavoured Wild Dances, followed by this year’s satirical Eurovision triumph from sensational comedy drag act Verka Serdyuchka have given Ukrainian pop a pan-European profile, but the more artful offerings of the country’s top young acts have had a more wide-reaching impact in Ukraine itself, giving the language a credibility it had long lacked among the streetwise teenage population. Many of these pioneers of Ukrainian language pop have also enjoyed considerable success in Russia and elsewhere across the former USSR and Eastern Europe, helping along the way to dispel previous misconceptions on the indivisibility of Ukrainian and Russian national identities.

A similar process has been underway in the literary world, where Ukrainian language books have made huge inroads over the past fifteen years into an industry that had previously been dominated for decades by the Russian language. Exciting young talents writing in Ukrainian have served to give the language a modern feel while reintroducing a teenage audience to the versatility and expressive power of their national language. This trend has also been felt in the mass media, with the national TV channels leading the way and radio, magazines and newspapers following suit.

The end result of this cultural revolution has been to change the way Ukrainians see their nationality. After sixteen years of independence young Ukrainians now have a role models to look to and a new, vibrant Ukrainian youth culture to associate with. The result has been to foster a renewed sense of attachment to today’s emerging Ukraine and popularize a dynamic national identity which has helped generate a sense of proud patriotism in a land where such sentiments were previously degraded as manifestations of fascism by the Soviet propaganda machine. 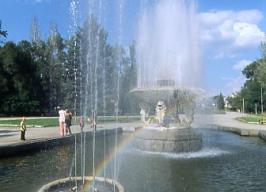