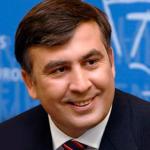 Mikheil Saakashvili - Georgian political and the statesman. Held a post of the president of Georgia of c on January 25, 2004 till the November 25, 2007, one of leaders «revolutions of roses» as a result of which Edward Shevardnadze was detached from the power.

Mikheil Saakashvili was born on December 21, 1967 in Tbilisi in a family of the Georgian intellectuals. Father Nikolos — the physician by training, mother — Giuli Alasany, the professor-historian, the expert in culture of medieval Georgia.

In 1984 Mikhail left secondary school No. of 51 g of Tbilisi with a gold medal. In 1992 with honors graduated from faculty of international law of institute of the international relations of the Kiev university of T.Shevchenko. After the higher education institution termination Mikheil Saakashvili returned to Georgia where worked as the lawyer-adviser in the State committee on protection of human rights. After receiving a grant, went to the Strasbourg International institute of human rights, and in a year as the scholar of US State department, was directed on training in the Colombian university where in 1994 got degree of the master the driver's license. Also future president of Georgia was trained at J University. Washington, trained in Academy of the European right in Florence and in the Hague academy of international law.

For years of study Mikheil Saakashvili received some honorary titles:

In September, 2001 Mikheil Saakashvili accuses Edward Shevardnadze and members of his government of corruption, resigns, and then creates the oppositional political organization «National movement».

On November 3, 2003 in Georgia the parliamentary elections which result was not recognized by oppositional blocks «National movement», "Democrat Burjanadze" and "Patiashvili-Edinstvo" therefore in Georgia the protest actions which have become history, as «revolution of roses» began took place.

As a result of protest actions on November 23, 2003 in Georgia there was a power change. On November 2, 2003. Edward Shevardnadze was compelled to retire, and new elections on which for Mikheil Saakashvili's candidate 96,27 % of voters voted already on January 4, 2004 took place.

One of results of activity of President Saakashvili are considerable, successes in fight against corruption business, including in law enforcement agencies.

Also new leadership of Georgia led by Mikheil Saakashvili could agree about significant increase in the foreign help.
In 2004 by means of Saakashvili a series of libertarian (ultraliberal) economic reforms was initiated. In 2005 — 2007 of gross domestic product of Georgia grew with speed over 9 % a year, and in 2006 the World bank made the statement according to which Georgia was the world leader on rates of improvement of business climate: in an index of quality of investment climate of the World bank Georgia took the 37th place.

On March 13, 2007 the Georgian parliament unanimously approved the decision on the accession to NATO. The congress of the USA, for its part, supported this decision.

Saakashvili has some awards and medals, such as: 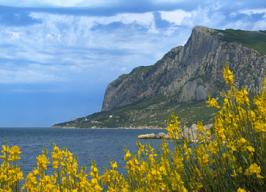