In Zakarpattya in the west of Ukraine, there is a small, but very hospitable and interesting city for travellers – Mukacheve. Its narrow streets paved with cobblestones, street lanterns stylized to look antique, and a city hall (1805) with chimes give the city a typical European look. And this is not a coincidence, but the result of tumultuous historical events that took place in the land. Mukacheve appeared on the crossroads of trade routes established a long time ago, at the juncture of different civilizations and national cultures.

In different periods of history, Mukacheve and the surrounding lands had been part of Hungary, the Galicia (Halych)-Volyn Kingdom, the Austro-Hungarian Empire, Czechoslovakia, and later it was a part of the USSR, together with the Ukrainian Republic. As early as the 6-th–9-th centuries, several Slavic settlements appeared on the territory of modern Mukacheve and later they merged into one settlement. This period relates to the appearance of the first fortifications, erected to protect the borders of Kyivan Rus. The first reference to the city in written sources dates to year 896 in reference to the Hungarian Prince Almos’s taking of Mukacheve. In 1376, Queen Elizabeth of Hungary and Poland gave the city a privileged status and permission to have its own seal showing St. Martin, the city’s protector. In 1413, Prince Fedir Koryatovych founded a monastery on Chernecha Mountain, a powerful center of spiritual life for the entire land. And in 1445, the city received Magdeburg rights. Mukacheve became famous in 1685–1688, when it resisted the troops of an Austrian emperor who besieged the city’s fortress for almost three years. A woman, Yilona Zrini, the widow of Prince Ferenc Rakoczi I, led the resistance, withstanding experienced commanders. Later, in the 17-th–19-th centuries, many times the city became the center of a struggle for liberation against the empire’s domination. However, ‘the Austrian period’ left a significant imprint both on the city’s character and architectural image. Even today, Mukacheve’s showpiece is its city hall, built in 1805–1809. This is one of the city’s greeting cards. The Schenborn family’s castle, with its original architectural style, also has historical and architectural value. But the most popular landmark among tourists is the legendary medieval castle called Palanok, which towers on a 68-meter hill above the city. The exact date of the founding of this fortification is unknown; however, it is mentioned in written sources for the first time in the 11-th century. In the 14-th century, the first stone castle, Palanok, was erected, and later Austrian and French engineers-fortifiers transformed it into an impregnable fortress. During its history the castle changed flags and owners many times. At different times in its history, the following individuals ruled in it: Podillya Prince Fedir Koryatovych, Hungary’s Regent Janos Hunyadi, Transylvanian princes of the Rakoczi dynasty, Austrian Count Schenborn, and many others. In 1782, the Mukacheve castle became a political prison for representatives of different peoples of the Austrian Empire, one of the largest in Europe. The unique construction performed this function until 1896. Thus, for many centuries Palanok had been an impregnable outpost, a king’s residence, a rebellious capital and severe prison cells. In 1805–1806, after Napoleon seized Vienna and French troops entered the territory of Hungary, the crown of the Hungarian royal throne was preserved in the Mukacheve castle. Today, Palanok remains one of the most valuable military-architectural landmarks of Ukraine and Europe. Its quiet inner yards, bastions and old chambers have preserved the spirit of the past centuries until today. Today, the Mukacheve castle greets tourists from Ukraine and many other countries. In 1993, a history museum and an art gallery were opened. The gallery exhibits canvases by famous artists of the past century as well as modern pictorial art, and an exhibition called “Wooden Churches of Zakarpattya” is open to visitors. 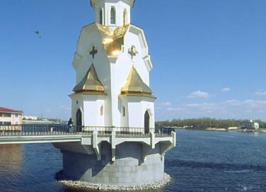