Before being started up in wandering across Ukraine, it is necessary to solve some organizational questions:

If overcoming of all route seems to you very tiresome, you can choose one of the cities and go behind impressions exactly there.

This tourist route on the right coast of Dnepr we suggest to begin with Pereyaslava-Khmelnytsky. The small town is near to the capital of Ukraine – Kiev.

At the time of Kievan Rus' Pereyaslav was the large fortifikatsionny city. Here the local Museum open-air – the main sight of the small town is located. Walking on its avenues as though you are transferred on several centuries ago. Wooden towers of Cossack strengthenings, ancient mills and cathedrals – all of them give to this place a special unique charm.

If to you Right-bank Ukraine is more to liking, begin the route with Hotin's small town. In Hotin on slopes of the right river bank Dnestr the stone fortress which was erected in the XII century by order of prince Daniel Galitskogo on a place of wooden and earth strengthenings was stretched.

The structure of a fortress includes four defensive towers, a palace of the commandant, church in which the museum of local lore now is located.

Under fortress walls bloody fights more than once boiled. In 1621 the Cossack army of hetman Sagaydachnogo crushed Turkish army which was considered in those days as an invincible. Also during emancipating war in 1650 and 1653 the Hotinsky fortress was visited by Bogdan Khmelnytsky's armies.

Also do not forget to visit Mukachevo. It is one of the most ancient cities of Zzakarpatsky area. Here the Palanok Lock – the former residence of prince Kornatovich is located.

The majestic walls of this lock sung in legends and songs, repeatedly reflected invasion of enemies and were silent witnesses of heavy fighting. A palace «White House» which Shenbornam earlier belonged to columns, – one more sight of the city.

Locks are true richness of Zakarpatye. Therefore on the right coast of Dnepr it is necessary to lay a route through such places, as:

• «A gold horseshoe»: Zolochevsky, Olessky and Podgoretsky locks (all of them are nearby to Lviv, which in itself deserves separate attention);
• The Uzhgorod lock (the lock and the city will present to you unforgettable memoirs);
• The Hustsky lock (it is the legendary castle impregnated with riddles, secrets and unusual legends).

All these extraordinary picturesque, impressing places – only small particle at the boundless ocean of the most interesting geographical routes of Ukraine. So, if you decide to study the country by traveling, reserve some time, patience and get right in the way! 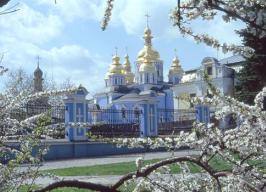