Odesa. A pearl by the sea 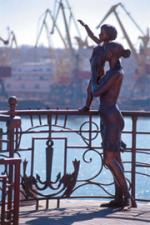 If an ordinary lifestyle is not for you, our advice is to come to Odesa. This vivacious seaport on the Black Sea coast frolics in the good life around the clock. The extraordinary aura of Odesa is able to reveal talent, return brilliance to ones eyes and a smile to ones lips. During the 200-year plus history of the city, a lot of people have had a chance to make this city their own.

Eminent poets Aleksandr Pushkin, Allen Bosque, Lesia Ukrainka as well as the well-known painters Nikolay Rerykh, Vasyl Kandinsky and the famous doctor N. Pirogov and chemist D. Mendeleyev – here is only a part of those lucky people who happened to visit Odesa. And they were also the ones who fell in love with the city for the rest of their lives.
Odesa was founded in 1794 as a seaport that provided protection and guard of the southern borders of the Russian Empire. In order to contribute to the construction of the new city, energetic and brave representatives of various countries came to Odesa. Among the pioneers, were Ukrainians, Russians, French, English, Jews, Moldavians, Greeks, Bulgarians and many others. From this ethnic “cocktail”, the original nationality of Odesites was born. The business-mindedness peculiar to the Odesites and the favourable conditions of a Porto-Franco (a free port regime) which attracted migrants and merchants from many European and Asian countries soon turned Odesa into one of the richest cities of the Russian Empire. In his time, Mark Twain even cited the Odesa phenomenon as an example for big American cities.
Today, Odesa is the biggest seaport as well as a prime historical and cultural treasure of Ukraine. The city, with a population of over 1.2 million people, maintains a dynamic economic development on a par with the capital Kyiv. In show business and entertainment, the city has no equal in Ukraine. Theatres, concerts and rich museum collections will amaze aesthetes. A variety of sports and recreational facilities, concentrated on the seacoast, with restaurants, casinos, and discos create a holiday atmosphere.
But among Odesa’s biggest treasures are its inhabitants. The optimism of the Odesites coupled with their effervescent sense of humour has garnered the city a reputation as a capital of laughter. Annually, Odesa’s festivals of humour, music and art inspire visitors with energy and joy. The celebration of the days of the city, which begins in September, replenishes the stock of cheerfulness for the entire year.

So, welcome to Odesa for new impressions!