Recognition of the Ukrainian diplomas in other countries

With the Ukrainian diploma you can be engaged in professional activity or continue your training in any country of the world.

In order that your diploma received in Ukraine, was valid for territories of other state, after its receiving you should undergo legalization procedure. If the country chosen by you, as well as Ukraine, is the participant of the Hague convention, will enough certify the diploma an apostille.

Diplomas the Ministry of Education and Science, youth and sports of Ukraine is engaged in Apostilirovany. This procedure of legalization of documents is universal for all participating countries of the convention.

Also it should be noted that procedure of confirmation of qualification and diploma legalization in each state has the features.

Bilateral agreements in the field of recognition of diplomas are signed with Russia and the majority of the countries of the former Soviet Union. In these states procedure of recognition of qualification of students is most simplified.

Ukraine, together with 43 other countries, is the member of the Lisbon convention on recognition of qualifications of the higher education which action extends practically on all states of Europe. Except the European countries, the USA, Canada, Australia, Israel, Kazakhstan and Belarus also joined it.

In 2011 in Ukraine the National information center of the academic mobility was created. The center carries out recognition in Ukraine of documents on the education, given out in other countries, and also helps graduates of the Ukrainian HIGHER EDUCATION INSTITUTIONS to undergo recognition procedure abroad.

In 2005 Ukraine joined the Bolonsky declaration. At present, together with other 47 European countries, the country government constantly introduces bolonsky reforms in an education system. Thus, Ukraine chose the course aimed at the European standards of education, integration into the all-European educational and scientific space.

Completely to realize basic provisions of the Bolonsky declaration, in Ukraine there take place large-scale reforms and modernization of educational branch. The three-stage system of training of specialists with the higher education is entered. Such scheme answers the European standards of education and systems of the majority of the countries of the world.

Everything, without an exception, HIGHER EDUCATION INSTITUTIONS of Ukraine passed long ago to credit and modular estimation of knowledge (ECTS) which is used in Europe. The annex to the diploma of the European sample is also approved.

All these changes are directed on optimization of the Ukrainian educational system and unification with the relevant systems of other countries. As a result, procedure of confirmation of level of the knowledge received in Ukraine, will be considerably simplified. 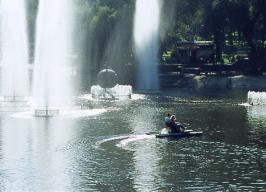