What is the age of humanity? This question has long been asked by historians and archeologists. And every educated person is being curious about the subject. Archeological findings suggest that the age of Homo Sapiens varies. The historical science, however, while talking about the “conscious” history of mankind use written chronicles left by our ancestors thousands years ago.

It has been believed by now that the first civilization that used written language was the Sumer culture with its center located on the territory of modern Iraq about 40 c. B.C.  But can we really believe that a highly developed civilization could suddenly appear out of cultural “nothing”? The civilization that was able to read and write, cast metals, used potter’s wheel, a wheel, an irrigation system, and had sophisticated knowledge of astronomy? Some of the above achievements of mankind could have first appeared earlier in the depth of civilizations yet undiscovered. Indeed, pre- Sumer inscriptions were found in the Danube basin and in the Balkan area, in Turkey and in Middle Asia. But all these texts turned out to be just fragments and extracts from the biggest and the oldest collection of “chronicles” found on the territory of modern Ukraine, in its Zaporizhia region close to town of Melitopol, to be exact. This finding makes the written and known history of mankind double. The pre-historical human culture is hidden in this place.

In quite a while the Pyramids of Egypt will be built, Hellenes will siege Troy, the Sumer polices will prosper and an administrative system considered the first state in the world will be founded. But it will be later.

And now steep hills that are 2 billion years of age stand in the width of the steppe. Once it used to be an acting volcano. To date it is the only place in the world where granite layers come to the land surface. The unusual for the steppe area mountainous place has attracted people since ancient times. Rock paintings depicting mammoths still keep the memory of its first inhabitants dating back 20-40 thousand years. But the biggest mystery is the Stone Grave sanctuary. This giant grit stone slab 15 meters of height and more than 200 meters in diameter is engirdled by two circles of kurghans (burial mounds) stretching on 5 and 17 km accordingly. The sanctuary researchers believe that through centuries the Stone Grave has been the most powerful spiritual-religious center for the most of the Eurasian Continent. More than 60 caves and grottoes with rock paintings, signs and characters have preserved here. That is why the place has been called the Stone Library. But who and in what language speaks to us through the millennia? Attempts to decode the texts using Old Greek and other European languages gave no results. The Sumer cuneiform, however, was quite efficient. Ukrainian scientist- Sumerologist Anatoliy Kifishyn, who was involved in texts decoding believes that the archive of the “library” encompasses the time period from the middle of XII to III millennia B.C. The ancient inhabitants of the Stone Grave area used a plough, a chariot, metal fusion and many other important achievements of civilization. And the Stone Grave calendar dates back XII millennium B.C. The Sumer cosmogony legends, legends about the Deluge and King Hilgamesh found in the Bible, have been found in the Stone Grave chronicles dating back VII millennium B.C. The inference is that the sanctuary collection is the most ancient known chronicle on the Earth. Possibly, it is the embryo of world’s most sacred texts. According to the scientific hypothesis, the Tripillia archeological culture existing in VI-III millennia B.C. on the territory of modern Ukraine is the famous Aratta that was the Sumers’ motherland before they had moved to Mesopotamia. In Sumer, human civilization just continued. Of course, to date this is just a hypothesis. And it will take much time before scientists find consensus what the Stone Grave really is, and how long the humanity exists. But now everyone has got a chance to see the world’s oldest library and feel the breath of eternity. 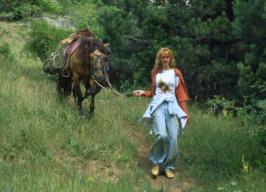