Ukraine and France prepared the agreement on recognition of diplomas

In July, 2012 the meeting of the first deputy the Minister of Education and Science, youth and sports of Ukraine of Evgeny Sulima from the attache on university and scientific cooperation of Embassy of France in Ukraine Guillaume Colin took place.

During a meeting the moments concerning cooperation of Ukraine and France in the field of education were discussed. In particular, the parties discussed work on the agreement text between Ukraine and the French Republic about recognition of the Ukrainian diplomas about the higher education.

Also the parties defined the major bases for the intergovernmental cooperation agreement in the field of education.

As Evgeny Sulima noted: «In the text it is written down not simply «in the field of education», and are allocated secondary and higher education. Therefore we will prepare such draft agreement in which we will open questions of cooperation and at high school, and in the highest».

In turn, Guillaume Colin emphasized that fact that enhancing cooperation between Higher education institutions of both countries in the field of education occurs to bilateral interest. «Not only the Ukrainian students go to study to France according to programs of the academic exchanges, but also the first French students this year will study in the Ukrainian HIGHER EDUCATION INSTITUTIONS according to the master program», – declared Knees.
This event has huge weight for a development of education of Ukraine as a whole.

For a long time training in Ukraine was considered effective and qualitative. The students who have got here education, never let's doubt an occasion themselves, surprising the public, and pleasing teachers with new opening.

Simplification of procedure of recognition of the Ukrainian diplomas not only will give the chance to prove once again level of knowledge, but also will open a door for many foreign citizens, wishing to study and constantly to develop. 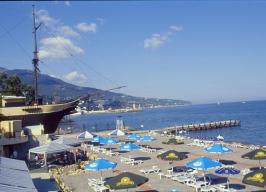