Ukraine is not Russia

You could say that during the Soviet period Ukraine was second only to Russia in its importance as a constituent member of the USSR. This has led to many looking at Ukraine as a 'small Russia' and expecting that post-Soviet Ukraine would follow the same path as that taken by post-Soviet Russia.

Ukrainians and experts in the know will be quick to disabuse you of that notion.

"Ukraine is much more European," said Jorge Intriago, a partner at accounting giant Ernst & Young and an 11-year resident of Ukraine. "Russia wants to re-establish itself as a world leader," he noted, whereas "all Ukrainians want to be European."

As evidence of this different attitude, he noted that Ukraine simply accepted the European experience with Value Added Tax (VAT), whereas Russia wanted to invent its own. The two countries do, of course, share deep roots. Both embraced the Orthodox Christian faith, and both are culturally Slavic. Russian is still the dominant language in eastern Ukraine, and is spoken by the vast majority of Ukrainians.

This is part of the reason for the old guard's ties to Russia. In addition, many of the older generation grew up revering the Soviet heroes, and to this day there are a good number of statues of Lenin in key locations around the country, including in prominent locations in Kyiv, Yalta and Sevastopol.

Yet Ukraine's pro-European orientation is a strong force, and explains a general agreement in the country - at all levels - that the future lies with Europe. It also explains why the main three parties vying for control of the government are not far apart on most foreign policy issues.

At the same time, pragmatists note that Ukraine must maintain good relations with Russia. It is dependent on Russia for 75 percent of the 80 million cubic meters of gas it uses every year, much of that for industry, and Russia is both the main investor and trading partner of Ukraine.

Ironically, foreign investors have preferred Russia to Ukraine, in everything from hotels to energy companies. Last year, Shell became the first Western major to invest in the energy sector when it put $100 million into a joint exploration project with a subsidiary of government owned Naftogaz Ukrainy. Russia, by comparison, has had major investments by Western oil companies for years.

Patrick van Daele, Shell's general manager in Ukraine, said that while he had been successful in recruiting "very high caliber people," the virtual government monopoly of the energy sector was a major hindrance to its successful development. He said that though he had found there was recognition among engineers and technicians in the industry that Shell's technology and financial resources were needed to reach unexploited deposits of hydrocarbons, the people in charge were preoccupied with ownership and control issues.

Van Daele noted that with improved efficiencies, a great deal of gas wastage could be stopped, but that political will was still lacking to make the necessary changes in metering and implementation of more efficient technologies.

Nevertheless, while Russia under Vladimir Putin appears to be increasingly nationalistic in politics and business, the entry of Shell into the Ukrainian market, and the overall opening of the country to foreign investment and participating in everything from development to manufacturing, would seem to point to a new phase in Ukraine characterized by ever closer ties with the West. This is undoubtedly the trend for Ukraine's new generation of leaders, in all spheres. 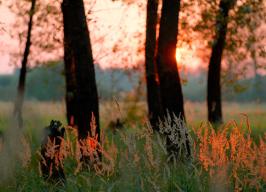