Looking back…
In Ukraine, it might seem useless to recall the words of the half-forgotten “leader of the proletariat” Lenin who said almost a century ago that “among all arts, for us (the Bolesheviks) – cinema is the most important.” This outstanding PR man of his time understood perfectly well that cinematography is a powerful tool to influence public opinion and establish a new form of ideology. Nevertheless, despite the various ideological pressures resulting from the Communist’s view of cinematography, Ukraine gave birth to a range of talented filmmakers in the Soviet period who have become acknowledged 'fathers' of world cinematography. So, what is the history of this most popular of the arts in Ukraine and how are things at present?

Motion pictures were first seen in Ukraine in 1896 when the cinematographic productions of the Lumiere brothers appeared in the Black Sea port of Odesa and then spread to other cities. At the beginning of the 20-th century, film studios in Kyiv, Kharkiv and Odesa began to produce films on Ukrainian themes, but with the outbreak of revolution in 1917 the development of cinema ceased.
Under Soviet rule all private film studios were nationalized. At first, there were only two film studios (known as film factories) one in Yalta and one in Odesa. In 1929, a larger film studio opened in Kyiv. It was named after outstanding Ukrainian film director Oleksandr Dovzhenko. The production base of the film industry and the network of theaters it catered to expanded enormously over the coming years, as well as the army of cinema-goers themselves. With such a substantial base, Ukraine later became one of the most important movie-making centers of the former USSR republics, responsible at one time for some 30% of the total film production in the Soviet Union. In the mid 1980s, the Ukrainian movie industry annually produced about 60 full-length features and 500 documentaries, animated and popular science fiction films, generating over $200 million in gross revenues a year. More important than these cold figures and hard cash, though, was the distinctive national color that Ukrainian films possessed in Soviet times and the impact this had on national consciousness.
After the collapse of the Soviet Union, the system of Soviet cultural institutions began to disintegrate, including cinemas, which to this moment were fully administered and controlled by the state. Film industry entered a stagnation state because the state couldn’t finance it in the same volume as that had been the case, during the Soviet times. Besides, except for administrative reorganization, there was also a need for qualitative reorganization of the film industry. In times of an absence of a unified propaganda course, it became necessary to learn how to make commercial movies which would be of true interest to the audience. And, although this process is still not yet completed for today, it is already possible to say that the modern Ukrainian cinema does find its themes and its viewers. 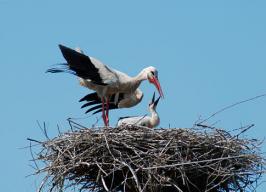