What associations come to mind when talking about Ukrainian art? Perhaps pieces of gorgeous embroidery or painted Easter eggs? Or maybe pottery or other handicrafts made by skillful Ukrainian artists? But have you ever heard of Ukrainian modernism? We are sure you are familiar with some of its outstanding artworks, albeit without knowing they were Ukrainian. The point is that Ukraine's cultural history – still an undiscovered sphere – has frequently been submerged within a homogenized ‘Soviet’ experience. The international avant-garde movement is hard to imagine without innovative artists from Ukraine. The time has come to bring to light the important role that Ukrainian artists played in the birth and development of the international avant-garde movement in the period 1910-30.

World-famous and relatively unknown artists created an extremely rich repository of modern works influenced by Ukrainian traditions and lifestyles. Much of the better-known Russian avant-garde art also found its roots in Ukraine. Most of the artists had Ukrainian ties by origin, education or national traditions including Kazimir Malevich, a Pole born in Kyiv, Davyd Burliuk, a futurist, Oleksandra Ekster, founder of the Ukrainian School of painterly constructivism, as well as internationally unknown Ukrainian artists such as Vsevolod Maksymovych, Oleksandr Bohomazov, and Yasyl Yermylov. Interestingly, an oil painting of the latter was bought by a Soviet museum for 30 roubles, while almost 70 years later the same painting was sold at Sotheby’s for 120 thousand pounds!
Avant-garde artists sought out typical Ukrainian scenes and traditions for some of their more dynamic works. Street scenes in Kyiv and life along the Dnipro were often portrayed with spaciousness and bright colors reflecting the influence of Ukrainian folk art, which is among the most diverse in the world. One of the founders of the Cubism art trend Oleksander Archipenko, drew on pagan Trypillian artifacts, Scythian ‘earth-mothers’ and the mosaics of St. Sophia Cathedral in Kyiv as inspiration for his sculpture. He continued with this trend during his later career in New York. The father of Ukrainian monumentalism, Mykhailo Boichuk, developed a distinct style in which he painted grand monumental ensembles, most of which were sadly destroyed in the 1930s.
Ultimately, the caliber of a creative individual is determined not only by what is left behind, but also by what that individual was not allowed to do. As elsewhere in the former Soviet Union, Ukrainian avant-garde artists were often persecuted and their works were banned or destroyed. Nearly 2000 works were confiscated by the government during the 1930s, and only 300 remain today. The fall of the Soviet Union and the consequent opening up of many hitherto inaccessible archives (“spetsfond”) has allowed a new probing of the master narratives created during that regime. A huge collection of Ukrainian avant-garde has been recently restored and put on show in the National Arts Museum in Kyiv. Research by Western and Ukrainian scholars has highlighted the deep interaction of Ukrainian art with European art process, and Ukrainian avant-garde is now interpreted as a European phenomenon.
Ukrainian artists became either founders or had a sufficient impact on various avant-garde styles known in the world:
Cubism (Archipenko, Burliuk and Ekster), Cubofuturism (Bohomazov), Suprematism (Malevych and Sobachko-Shostak), Neoprimitivism (Yermylov, Palmov and Burliuk), Expressionism (Epstein, Shekhtman and Palmov), Surrealism (Tyshler), and Constructivism (Tatlin, Ekster, Meller, Yermylov).
Many of these artists worked not only in Ukraine, but also in Europe, Asia and the United States, usually maintaining their Ukrainian cultural identity. 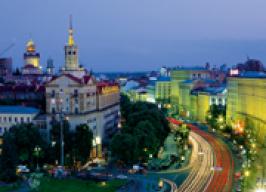