Valeriy Lobanovsky – An Epoch in Football 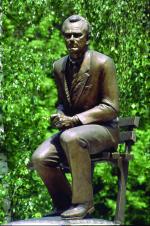 Valeriy Lobanovsky. This is an entire epoch in Soviet, Ukrainian and European football. Lobanovsky's football is a discovery that will remain in the history of the world of football forever. Valeriy Lobanovsky was both a remarkable player and an outstanding coach. His legendary corner kick – “a banana kick” – was included in all the textbooks on football.

In the 1960s, fans specifically used to come to the stadium to watch his unusually sophisticated play. What he did on the field! This red-haired wing man brought the stands to silence from delight. With ease and sophistication, he would spin the ball from a corner of the field and send it in a mathematically verified trajectory. And when the ball landed behind the goalkeeper’s back, the stands would explode with ovations. And only he, a 22-year-old student of the Kyiv Polytechnic Institute, knew that precise mathematical calculations and exhausting trainings were behind that ease and sophistication.

The Magnus Effect (the deviation of a spinning object from a rectilinear direction) had been known for a long time. However, Lobanovsky found a practical application for it by calculating the velocity, force and point of contact with the ball. Such a kick with a turn changes the trajectory of a ball and makes it unexpected for the rival. His signature corner kick – “the banana kick” – was something that enchanted you with its beauty! Lobanovsky always knew that football was not just a game, but a science as well. Later, when he became a coach, he was the first to found a training process on a scientific basis and created an entire football technology. Valeriy Lobanovsky and Kyiv’s FC Dynamo. These two notions are inseparable. He was born in Kyiv, began his football career by playing in Kyiv’s FC Dynamo, and then he became its coach. He went to other cities and countries, but always returned to Kyiv, to FC Dynamo. Together with him, the Kyiv club won 8 Championships and 6 USSR Cups, 2 UEFA Cup Winners’ Cups, 5 Championships and 3 Ukraine Cups. And what about the triumph in the UEFA Super Cup of 1975! A young and audacious FC Dynamo from Kyiv did not just beat FC Bavaria. They beat the world champions – Uli Hoeness and Franz Beckenbauer! And when Lobanovsky was appointed as the coach of the national team of the in 1975, people joked: “The Soviet national team is Kyiv’s FC Dynamo, weakened by players from other clubs…”

We remember how he would sit in a dugout and squirm and wriggle. His sitting idiosyncrasies were known the world over. Lobanovsky will forever remain the real Teacher for his “golden” boys – Oleh Blokhin (The Golden Ball of 1975), Ihor Belanov (The Golden Ball of 1986) and Andriy Shevchenko (The Golden Ball of 2004). He continues his deeds through the efforts of his numerous students, such as Oleksandr Shovkovsky and Oleksander Zavarov, Serhiy Rebrov and Kakha Kaladze, Vladyslav Vashchuk and Oleksiy Mykhailychenko. This list can be continued endlessly. He will forever remain in the hearts of fans, Kyivans and all Ukrainians. Love toward him is infinite and his popularity is greater than that of many stars.