Kamyanets-Podilsky: a gem on stone 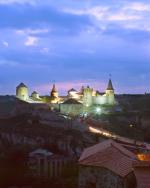 If you feel like medieval spirit is for you our advice would be to try Kamyanets-Podilsky. The air of this small town in Khmelnitsky region is so richly saturated with history that will envelope every bit of you as soon as your feet touch its stony ground. No wonder. A rocky island skirted by the tight loop of the river Smotrich (an estuary of the Dniester) flowing in a gorgeous canyon, served as a natural pedestal on which this miracle in stone was created over a thousand years ago.

The town’s history followed a long and windy path becoming a melting pot for a multitude of nations. Founded back in the 11-th century by the Eastern Slavic settlers the town also became home to Armenian merchants who did a lot for its further prosperity. In the 13-th century, as a part of Galistia-Volyn Principality Kamyanets-Podilsky suffered from the Mongol-Tatar Horde. Later on in the 14-th-18-th century, due to its favourable geographic location, the town was coveted by the strongest medieval powers. Lithuanian princes, Polish magnates, Ottoman sultans and Russian tzars - all considered it a fine stronghold. Different people have thus lived in Kamyanets-Podilsky for centuries each with its religion and culture. This could not help but leave a trace in the town’s unique appearance. The Poles built two elegant cathedrals, the Central and the Dominican. But while the 27-year power of Turks who seized the town in 1672 the cathedrals were turned into mosques, attaching a minaret. Interestingly, when the Poles returned they refused to tear down the minaret. They just added a statue of Virgin Mary on its top symbolizing the victory of the Christian faith. The statue can still be seen there, proudly towering over the city. But the city’s main attraction is its Old Castle to the left of the Castle Bridge over the Smotrich basin linking it with the Old City. Some historians claim that the Bridge had been standing there since the beginning of our era built by the Dacians during the Roman-Dacian wars. Since then the walls of the Old Castle had seen many battles but have survived through the ravages of time. May be that was why it had the best in Eastern Europe hydro-technical fortifications that seldom allowed strangers. Today, on the contrary, the Old Castle welcomes any foreign guest. The only battles that take place here nowadays are well-organised knights’ tournament shows. The Castle Bridge is now often used as a base for bungee-jumping. What can be more spectacular than flying down of the 57-meter high bridge which is 2000 years old! Either because of the stunning historic surroundings, or inspired by romantic spirit of this town, the inhabitants of Kamyanets-Podilsky value non-trivial holidays and know well how to create them. The Cup of Podillya annual hot air ballooning competition starts in May. Unbelievable! Dozens of colourful balloons fly at once in the sky over the Old City and the Fortress, and the canyon with its ancient Rocky Monastery and its ‘Atlantida’ Cave, and over the National Nature park, the pride of every Podillya inhabitant. Watching all this, obviously, almost everyone wants to become a balloonist himself! Balloonist or not, you will like the Podillya wonders when you come here whichever way chosen. It is within easy reach, just a few hours drive from regional centers Khmelnitsky, or Lviv, or Chernivtsi. Be among the first to discover the hidden Pearl on Stone, as Kamyanets-Podilsky is impartially referred to. The trip to this delectable corner will be truly rewarding. 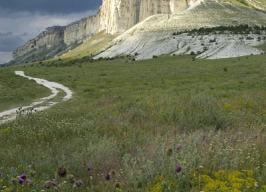