On the banks of the Siversky Donets River in the Donetsk region, there is a town of Svyatohorsk, earlier known as Svyati Hory (Sacred Hills). According to a folk fable, this is the place where the Slavic epic hero Svyatohir fell in a battle, defending the Russian land from invaders. Before he died, he passed his extraordinary strength over to another hero – Illya Muromets.

Indeed, the local sceneries have something fairy to them which makes one to believe in folk fables. Monastery domes rise on the right, abrupt, and unapproachable bank of the Siversky Donets, on the steep chalk hills. This is the Svyato-Uspenska Svyatohirska Lavra. No one knows when exactly the monastery on the Sacred Hills was founded. The first mention of it appeared in written sources in 1624. The monastery served not only as a place for one to seclude oneself for God’s service, but also for defense purposes. It was located on the eastern border of Russia and protected the neighborhood from foreign invaders. Right opposite a small monastery, a fortress was raised. It featured high walls and an exit to open water in case of a siege. The monastery has survived its rise and fall. Over some 75 years between the 17-th and 18-th centuries, it sustained five assaults by Mongol-Tatars. In 1788, the monastery was closed on an order of the Tsar’s government for more than a half of a century, and then again in 1922 by the Soviets for another seventy years. Yet, each time it recovered and got back to life. Today, the site of the Svyatohirska Lavra features buildings of various styles, raised over centuries. It is one of the oldest monasteries in eastern Ukraine and the cornerstone of the set of historical memorials of the national park Svyati Hory. In 2004, it was granted the Lavra status. Apart from historical monuments, the Siversky Donets banks features rare flora and fauna. So, if you seek peace of mind and wish to enjoy wonderful beauty of nature, you should visit this place. 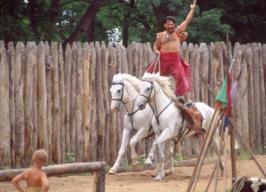